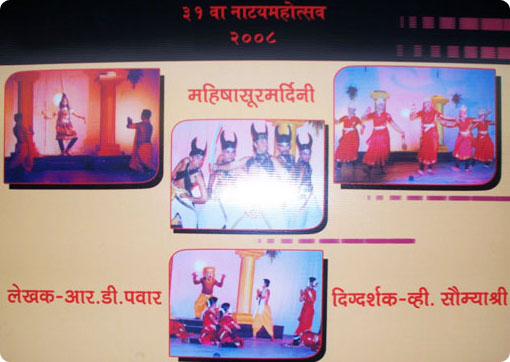 A Nritya Natika according to the Sanskrit Drama tradition, as prescribed by Sage Bharata Muni in Natya Shastra, with some modern innovations and choreography

It was performed on the Inaugral day of the 31st Natya Mahotsav of Natya Shastra Vibhaag, Dr. Babasaheb Ambedkar Marathawada University, Aurangabad on 2nd June 2008 at Tapadiya Natya Mandir, Aurangabad.

The story and idea depicted, is as follows in the poem given below :

‘Mahishasuramardini’ is an age old drama depicting the victory of the good over the evil. The evil is no less powerful, in fact it is powerful than the Mightiest – the Gods. He is intelligent, brave and strong. All the gods come together and create a power ‘Shakti’ which has the combination of all powers from all the gods together. This is manifested in the form Durga.

In the myth, with her charm and valour, she lures Mahisha and finally overpowers him. In today’s time we have Mahisha’s in every aspect of life, with their intelligence and strength they rule our unsatiated hunger for power.

In modern times, Mahisha uses this human weakness for his own good and becomes stronger and stronger. We feed Mahisha, we nurture Mahisha, by constantly craving for his luring. We make him more and more powerful. The obsolete power turns him into a demon and he starts destroying everything in frenzy.

This demon enters into the glass house of our dreams, and destroys everything that we desire. We need a goddess to destroy and control this demon, who will create the goddess ‘Shakti’ for us to quell the demon.

We are no gods to create one nor do we have the power to overwhelm the demon.To defeat Mahisha we have to control the Mahisha by controlling our desire, by resisting the unsatiated hunger for more, by checking our dreams for their falsehood, and sky rocketing ambitions.

Mahisha is not out there, Mahisha is amongst us, we are the Mahisha’s. It is time for us to rise and give birth together like gods, a collective power ‘Shakti’ which will save us from the peril of Mahisha.We are the Mahisha and Mahishasuramardini.

The above poem was the theme of the dance drama, and it was the blend of traditional with the modern. The choreography had many new concepts which came as surprises., the highlight being the use of masks and the cloth to depict urban world. The music was mostly instrumental and the choreography consisted of classical, folk and martial dance forms. It was conceptualised by R D Pawar., Directed and choreographed by V Soumyasri

The cast consisted of fourteen students of Natya Shastra Vibhaag, Dr. B A M U, Aurangabad. The play is of 55mts duration and the music is recorded.