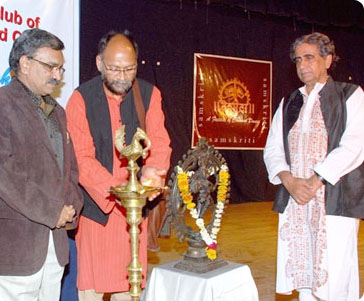 It featured Bharata Natyam by Guru V Soumyasree and her students. Kathak was performed by an eminent danseuse Ms. Manasi Sengupta, from Kolkatta. Ms. Manasi Sengupta is a student of Madhumita Roy of Kolkatta, and had the privilege of attending many workshops under Pt. Birju Maharaj, and performing in his and Saswati Sen’s troupe at many festivals. Ms. Manasi Sengupta enthralled the audience with her scintillating performance.

Both the styles showcased traditional repertoire with some innovations like Vrikshanjali in Bharata Natyam, a poem by Saint Tukaram in Marathi sung by Lata Mangeshkar, which emphasises on the importance of trees and nature. It was choreographed by V Soumyasree and was performed by V Soumyasree and her students, and it got a huge applause from the audience.

The other performers from Devmudraa were Pooja Gaikwad, Shruti Mokashi, Shubhshree Gajre and Sharvari Gajre. This festival aims to bring many more artistes from different styles of Classical dance from other states to Aurangabad in the near future. The festival was conceived by V Soumyasree and the programme was conducted by art and theatre critic, and educationist R D Pawar. It was supported by many patrons and the auditorium was packed to full capacity, a rare thing in Aurangabad for classical dance programme.